What is Flash Memory in Hindi? guys RAM, ROMs, SSD, Hard disk You must have heard of storage device etc. but very few people know that What is flash memoryIf you are also unfamiliar with flash memory and want to learn about flash memory, read this article till the end.

So let’s jump straight to our article to find out more Glow Memory What has been East Expansion from in hindi.

What is flash memory

Flash memory is permanent or non-volatile memory Memory is used Data is used for storage. Besides storing data, flash memory is also used to save and transfer data. 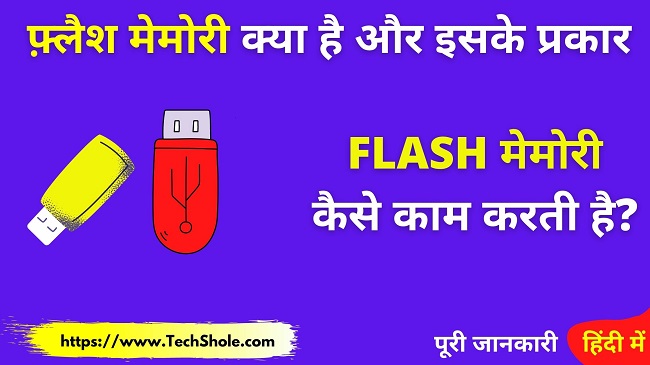 How does flash memory work?

Flash memory is embedded in semiconductor chips, and each chip contains an array of flash memory cells. Flash memory uses electrical circuits to save data, instead of using the traditional electromechanical method.

Current flows through the transistor between the electrical input (source) and electrical output (drain) of each cell. The transistor controls the current path by acting as an on-off switch or gate.

An on transistor allows the flow of electrons, which stores a 1 in the binary code, and an off transistor blocks the electrons and stores a 0.

A volatile memory returns all gates to the 0 position when power is removed, thereby erasing all stored data.

But a non-volatile memory works by connecting another gate, called a floating gate. As electrons pass through the powered transistor, some of the electrons stick to the floating gate and, with or without electricity, stay there indefinitely to store 1.

All types of programmable ROMs (PROMs) experience this partial loss of electrons. The EEPROM gate will only block electrons when a user applies a specific negative voltage to reset the transistor to 0.

There are mainly two types of flash memory and both are used for different specific purposes.

The speed of reading data in NAND flash memory is slow, it can only access the memory in blocks. NAND is inexpensive flash memory. It is suitable for large files and frequent updates. case able to store efficiently. At present, flash memory is widely used in the form of Pan Drive, SD card, etc.

NOR flash memory is capable of reading data at a much faster speed than NAND. It can read and modify data with higher accuracy. Its cost is high compared to NAND flash memory. The NOR rack is the ideal memory for running small code instruction programs. Users mainly choose NOR flash memory for code execution.

Here are the main functions of flash memory –

Here are some of the main advantages of flash memory –

What is flash memory?

Flash memory is a storage device used to store data securely for a long time.

What type of memory is flash memory?

What are the types of flash memory?

Flash memory was invented in the 1980s by Fujio Masuoka, an engineer at Toshiba Company.

Where is flash memory used?

You learned: What is flash memory in Hindi?